Yeah, I’ve been there before. It’s like you’re living the best moments of your lives. But while mother nature embraces you with her warmth, you’ll also get a taste of her wild side.

And there is one potential danger that grips the minds of most who sleep in the woods probably in a pop-up camper: Bears.

But are pop-up campers safe from bears? If you’ve been wondering about this, make sure you don’t miss a word on this page because you’re about to learn the brutal truth.

Are Pop Up Campers Safe From Bears?

There seem to be nasty rumors floating around that popup campers are safe from animal attacks.

Well, certainly not for bears!

Though they may look cuddly and Well-behaved from a distance, they are voracious beasts that can’t be stopped from taking their feast.

Don’t get me wrong, a popup camper is certainly safer than a tent.

Even though it is a tent-sided camper, there are still metal structures that could at least slow them down.

However, if it’s a hard-sided popup, you’ll have enough time to defend yourself before the bear could get to you. (more on that soon).

But the truth is if a bear is looking for a confrontation or driven by their lust for food not even a car, truck, or RV is going to stand a chance – let alone a popup.

In a range, they could tip your camper over. So it’s best if you could get to a building like a visitor’s center or a lodge in a bear attack.

Now, let’s not get it twisted. It’s not as though Mr. Bear will take a leisurely evening stroll and open your front door for a fight – not unless you give him a reason to.

They’d have to smell food or see movement from the camper to attract their attention.

I guess the truth is bitter right? Lol, some might even want to cancel their planned camping trips.

But here is what you don’t know:

There are thousands of campers (including the less confident ones) who are camping in some of the famous bear countries as we speak – where there’s a good chance you’ll see a bear.

The reason for this is they’re well informed on several things to do that keep even the thirstiest beasts from their doorsteps.

Let’s look at a few below: 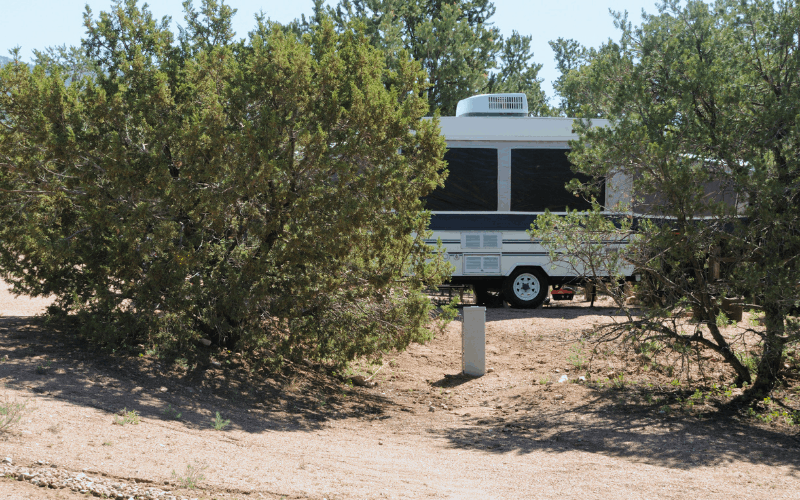 Since bears, in general, are scavengers the smell of your dish might be an open invitation for them.

Even worse, their sense of smell is so acute that they can detect animal carcasses upwind and from a distance of 20 miles away.

And that’s why strictly following camping food Storage set up at some of the national parks and campgrounds matters. It’s one of the best ways that a camper could stay safe.

Here are a few to adhere to:

We don’t store any food in our camper since Bears – especially the ones in the Sequoia and Yosemite areas– are quite ingenious and will rip through your camper canvas to get to the food they smell, without thinking twice.

Bear boxes are special metal vaults that are impenetrable to bears. The park regulations are to store coolers, canned goods, and even toiletries (anything scented) in it.

It’s wise to check either online or over the phone with the parks you plan to camp at, to know ahead of time the necessities that will fit in these bear boxes.

Because there is nothing more disappointing than arriving, only to find that half of your foodstuff and gears won’t fit.

However, if you’re interested in having some bear-proof of your own, you can buy some bear canister online or at a hardware store.

2. Get Rid of Your Trash

You want to try as much as you can to minimize any sort of food or hygiene product odor that could attract bears.

Many camp parks have areas designated for eating, so ensure you have your meals in those spots.

And since bears have an incredible sense of smell, even trash is critical to get rid of.

Below are more guidelines:

If you prefer to keep your windows open to receive fresh air at night, these lights are your best bet.

They’re motion-detecting lights that will shine bright if someone or something comes by it. Just mount them by the window, so whenever the sneaking bears come, the light will flash on as soon as they sense movement.

The sudden burst of light will take the bears aback and set them on the run, while you sleep peacefully.

Whether or not pop up campers are safe from bears, you should always have bear spray handy. Get enough for each of your passengers.

Lastly, If you see a bear, do not panic! Just keep your distance because Mother bears are very protective of their cubs and won’t hesitate to attack within the first sign of aggression.

Scroll to Top
We use cookies to ensure that we give you the best experience on our website. If you continue to use this site we will assume that you are happy with it.Ok